Bordering Tibet, Nepal was a natural place for many Tibetans to head to when they escaped from their country. Today, it is home to approximately 10,000 Tibetans who are scattered across the country in ten settlements. Since the first Tibetans began arriving in Nepal, many subsequent generations born on Nepalese soil have never seen their homeland.

Tibetan refugees in Nepal fall into two categories: those who hold a Refugee Card (RC) and those who don’t. Those who don’t hold a refugee card are technically in the country illegally and are obliged to keep a low profile. They have few rights; they cannot work, they cannot go to Nepalese schools, they are not entitled to any kind of welfare and they cannot get any travel documents so are unable to leave the country. For holders of an RC, life is marginally easier but still heavily restricted; they cannot apply for government jobs, cannot buy land and have no access to public healthcare or the Nepalese Old Age Allowance. Although they are entitled to apply for travel documents allowing them to travel for short periods, the process is time-consuming and extremely difficult, which puts many people off.

Nepal is home to many ex-freedom fighters. After the forceful occupation of Tibet by the Chinese in 1950 and the flight of the Dalai Lama in 1959, a Tibetan guerrilla movement was formed in secrecy. Consisting of over 2000 volunteers this movement was named a ‘Loe-Drik-Tsuk’ and worked towards the restoration of Tibet’s freedom. Their work was carried out over a 14 year period, from 1960 to 1974. Many volunteers sacrificed their lives resisting the Chinese occupation of Tibet.

Today, the majority of refugees make a meagre living by weaving carpets, spinning wool or selling small handicrafts and jewellery. However, the Tibetan community in Nepal is strong, with around 15 Tibetan schools and 20 medical clinics as well as more than 50 monasteries where young monks can also receive an education.

Where our current projects are 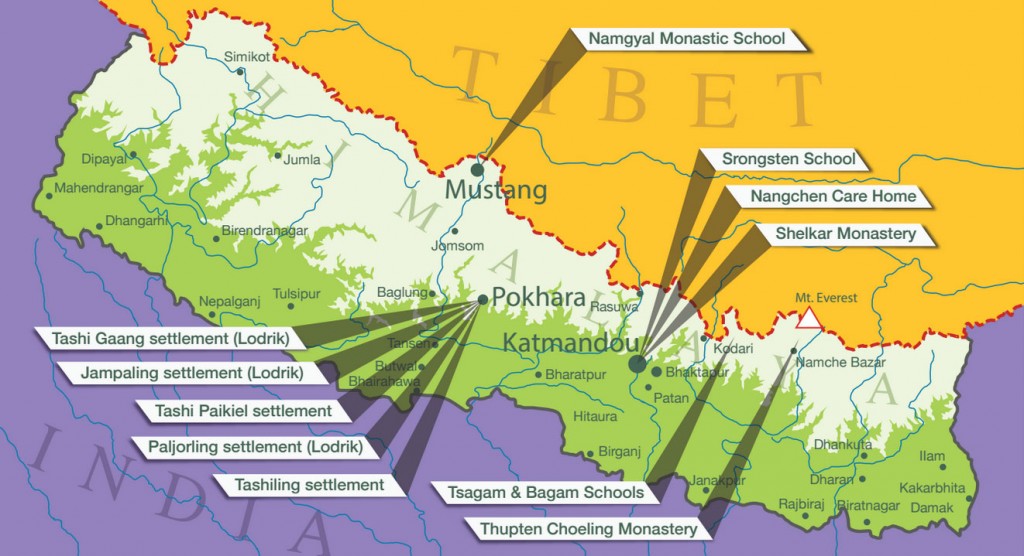 Previous Post Join us for the Freedom March and a preview of Drensol
Next Post SPRING CLEAN APPEAL: Help us create a clean and healthy environment for Tibetan refugees

Today is International Day of Persons with Disabil

"It is under the greatest adversity that there exi

With our Gifts of Hope you can give a life-changin