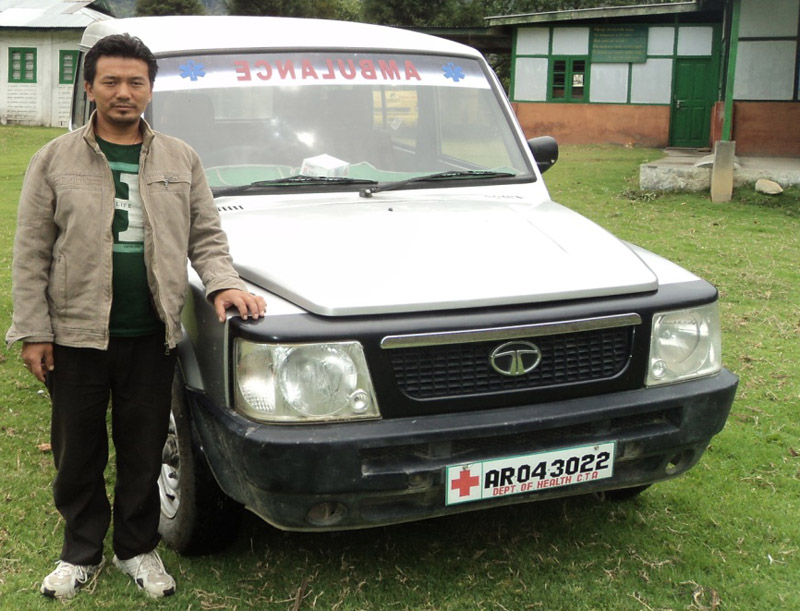 Tenzingang settlement is situated in the foothills of the Himalayas in north east India. At 45kms from the nearest town along dangerous and landslide prone roads, medical emergencies in the settlement can easily become life-threatening.

Buses in the area are infrequent and taxis are both unreliable and unaffordable. For many years the people of the settlement had no other choice but to rely on these options when they needed to go to hospital. Thankfully, the Tibetan Department of Health, within the Central Tibetan Administration, now provide the settlement with an ambulance which is a life saver to the community; however, they cannot afford to employ a driver.

Thanks to a generous grant received from a trust in 2011, we have been able to provide the Department of Health an annual grant to cover the salary of a designated ambulance driver. Not only has this provided a new job opportunity, the the driver recruited, Lobsand Dhondup, can provide immediate on-site attention; if further treatment is required he drives patients to hospital in the nearest city. Dhondup now plays a vital role in emergency cases, from trauma injures to cardiac arrest, often providing lifesaving support in the nick of time.

Having an ambulance driver in the settlement also means that patients non-life-threatening cases requiring hospital treatment, such as pregnant women and out-patients, can be taken to hospital for regular check-ups. This has helped improve the overall health of the community.

We are delighted the grant received from the trust will cover the ambulance driver’s salary 2017, which gives long-term reassurance to the local community.

Previous Post Tibet Matters – Autumn 2014
Next Post APPEAL: 90 per cent of Tibetan women give birth without support from a skilled birth attendant

Over the last year the world has seen first-hand t

Update from Steve who is currently walking 900 mil

Our raffle has now been drawn! Congratulations to

Looking to become a charity Trustee?⠀ ⠀ We are

We know many of you will be worried about the news

To celebrate #TibetanCalligraphyDay we are offerin

You have until midnight TONIGHT to enter our raffl

Your donations have done something amazing - the B

Leaving a gift in your will ensures your concern a

Tibetan Women's Centre in Rajpur is one of the old

We are getting ready to Meditate for Tibet on 3 Ju

"We can never obtain peace in the outer world unti

In 2018 your generous support of our crowdfunding

Phunchok Namgyal is eight years old. He loves to p

Why do Tibetans need your support? Watch our short

This #WorldHealthDay we have an update for you fro

"We share the earth not only with our fellow human