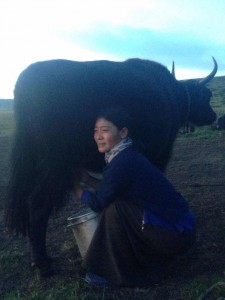 Palden comes from a small village in the Amdo region of eastern Tibet. In 2013 her husband sold their entire small yak herd and left her for another woman. Palden now single-handedly supports her four children.

Palden works hard for a well-off family in the village, milking their yak and collecting yak dung. She earns just enough to feed her children and is exhausted most of the time. School fees and medical bills are a constant worry.

In Palden’s village, poverty affects most families and nearly all the local people are illiterate. Palden would love her children to get an education, so that they can have more choice and control over their futures than she had. But she simply can’t afford the school fees for all four.

Most widowed or divorced women in her village are in a similar position, with no hope of ever breaking the poverty cycle.

You can help change this bleak situation. A brilliant new project could help Palden and her neighbours, and we need your help to get it started!

We want to train 15 low-income villagers – mainly single women who have families to support – to make and repair Tibetan clothes. Women like Palden will be empowered to earn their own living, on their own terms.

At the same time, the availability of local tailors will drastically reduce the clothing bills of most families in the village. They spend on average £650 per year on replacing cheap clothes from the Chinese market. Training a new group of villagers to make and repair Tibetan clothes will reduce living costs and also keep Tibetan skills alive.

Palden could earn between £5 and £7 per day from doing tailoring work at home. It could fund an education for all four of her children. Imagine how different their future could be.

The Tibetan community in north-east India is geogr

Karma is 15 years old. She loves school and her te

Thank you to the amazing Bristol4Tibet team who su

This is an urgent request for your help from Penpa

Your gift of £3 per month can give a young Tibeta

In 2019 we were delighted to work with High Peaks

We were recently tagged in a post about John Lenno

A very happy 86th birthday to our patron, His Holi

Thank you to all of you who joined @tenzin_phuljun

Are you ready for tomorrow? We can't wait to conne

Another team has joined forces with us to raise mo

Just one week to go until our worldwide group medi

"Meditation is valuable for all of humanity becaus

Today is #WorldRefugeeDay and we would like to hon

Through our sponsorship programme you provide supp

Meet @tenzin_phuljung , who will be leading a very